Fortnite’s crack in the sky has been growing steadily since last weekend’s rocket event, and now massive pieces of the map are disappearing before our very eyes.

Update: If you need further proof that the map in Fortnite is about to undergo massive change, watch this short video.

In it you’ll see the Motel sign – which has gradually been changing over the past couple of days – get completely sucked through one of the strange rifts that have appeared on the map.

Those rifts or portals or cracks or whatever you want to call them have appeared in numerous places around Fortnite island, so expect more strange shit to happen before Season 5 starts next week.

They’re all leading towards a Season that looks to be based around different time periods in history.

Original story: It looks like last Saturday’s Blast Off event was just the beginning of major changes in Fortnite’s map. Players watched as a giant crack appeared over Moisty Mire during the rocket launch, and now it seems the crack is growing.

Reddit users have been watching the fracture since it formed. In the process, it seems one strand in particular has been extending across the sky. 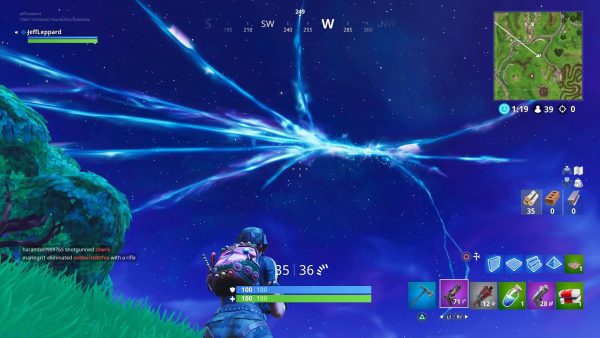 Right now, there are only theories on what changes this could herald for the game map. What is clear is Epic Games wants to replicated the campaign behind Fortnite’s comet, which grew in the sky as it approach the game world.

We’ll be watching the game closely for any other clues the fractured sky might offer, but feel free to share your theories in the comments. My favorite is still Cockatiel’s from the Reddit thread: “What if we are the candy inside of a llama and the visitor is cracking it with a baseball ball?”

The post Whole chunks of the Fortnite map are disappearing in real-time – watch appeared first on VG247.

Source: Whole chunks of the Fortnite map are disappearing in real-time – watch

Fallout 76's online multiplayer focus 'doesn't mark the future' of Bethesda
Retro immersive sim Synther looks like Deus Ex circa ’95
This new minion that was added in Final Fantasy XIV's patch 4.35 is everything

Previous: How to beat Granny – Where to find all the keys and escape items

Next: What are y’all in the USA playing to celebrate your Independence Day?