Thief Of Thieves adapts a heist comic from Mr Walking Dead, and is out this month 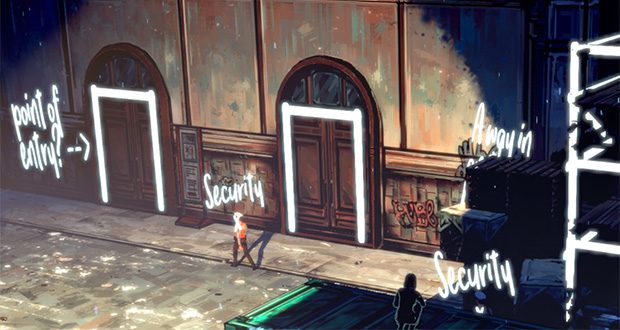 Y’know, ‘based on a comic from the writer-creator of The Walking Dead’ is not usually something I would come running for, but I just took a look at the launch trailer for heist game Thief Of Thieves and suddenly I’m paying attention. Stealth + XIII-style faux-comic panels captions + supercool music = HELLO.

Marketing is always trickery, but give it a watch and tell me you don’t feel a little tingle despite that:

No idea how all those big floaty words and split-screening is going to work in practice, of course, plus we have to fold in the additional complication of this being an episodic game. The oddity there is that the episodes – four in total, at least for what they’re calling ‘Season One’ – are due out weekly. The first and second eps are released as a double-bill on July 16th, the second on the 23rd, and the fourth on July 30th.

I’ve never read the comic this is based on, so you’ll have to tell me if it’s any cop or not, but the shtick here is that you’re apprentice criminal Celia, cutting her teeth on a range of thievery jobs while making what sound like Telltaleish story decisions in between ’em.

Devs Rival Games are also shouting about their cast, which includes Cissy Jones, aka ‘er out of Firewatch, and, er, the voice of a briefly-seen CGI fishman in Star Wars: Rogue One.

Again, the first chunk’s out July 16th – no price or pre-order links yet, but here’s a Steam page if you want to wishlist.

Source: Thief Of Thieves adapts a heist comic from Mr Walking Dead, and is out this month

GTA Online celebrates Independence Day with sales and explosions
Prepare to be told 'You're a loose cannon!' in This is the Police 2
Battalion Commander 2

Next: Phoenix Point continues to mutate in its latest update